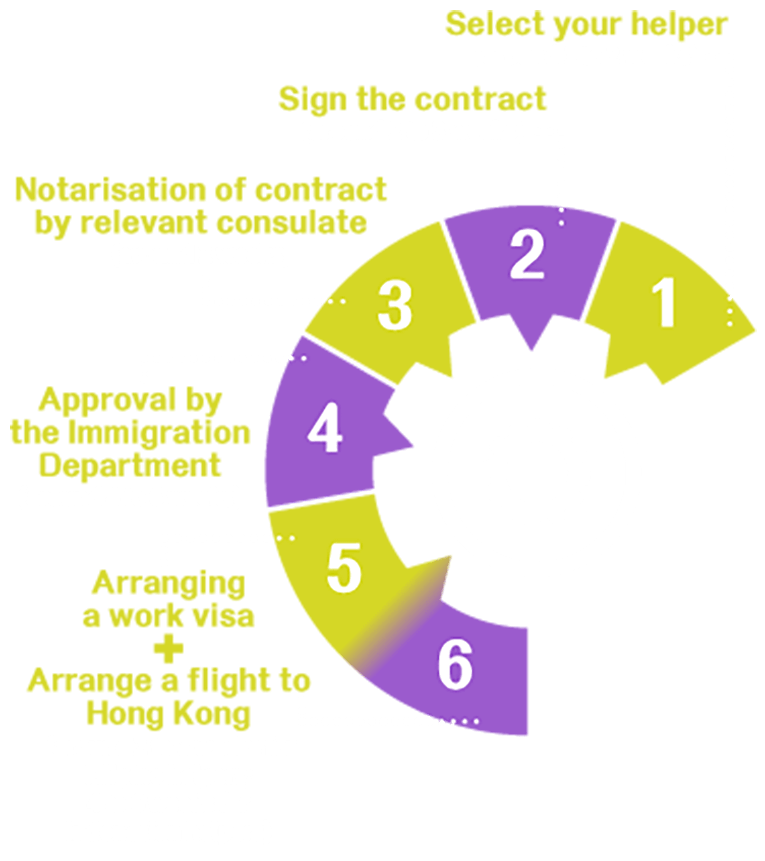 ＊During the Covid-19 pandemic, our application procedure and estimated durations will be subject to changes. Please stay tuned to our Facebook page for the latest updates.

Eligibility Criteria Required Documents Budget Salary Room and Board Arrangements Termination of Employment Contract Rest Days Statutory Holidays Paid Annual Leave Long-Service Payment
Eligibility Criteria
Required Documents
Budget
Domestic Helper Salary
A foreign domestic helper should be paid no less than the Minimum Allowable Wage (MAW) announced by the Government and prevailing at the date of signing the employment contract for employing the foreign domestic helper. The MAW is currently set at HK$4,630 per month.
Room and Board Arrangements
Termination of Employment Contract
Either party may terminate the contract by giving not less than one month's notice in writing or by paying one month's wages to the other party.


For helpers:
Rest Days
Employers should give their helpers one rest day within a period of seven days. Rest days do not have to fall on Sundays. Employers should and helpers should agree on when rest days should take place.
Statutory Holidays
After serving an employer for three months, a helper would be entitled to the following holidays (12 days in total):
Paid Annual Leave
A foreign domestic helper is entitled to 7 days of paid annual leave after serving every period of 12 months with an employer:
Long-Service Payment
Regardless of age, helpers who have served their employers for 5 years are entitled to 100% of long-service payment, which is calculated like so:

Note: Payment for service provided during an incomplete year should be calculated on a pro rata basis. (Please refer to the booklet, "A Concise Guide to the Employment Ordinance", for details on calculation.)

1. What is the penalty for people found guilty of employing illegal helpers?

2. Do employers have to pay helpers a year-end bonus?

No such provisions in current ordinances.

3. Can employers dismiss helpers who are on sick leave?

No, except in case of summary dismissal due to the helper’s serious misconduct. Otherwise, it is an offence under which the employer is liable to prosecution and, upon conviction, to a fine of HK$100,000.

4. When an employer lets go of their helper, how should they compensate the helper?

In addition to outstanding wages, the employer should also compensate the following

Chapter 18 of the Employment Ordinance states the following:

1. My helper is homesick and appears to be emotionally unstable. It’s affecting her performance. What should I do?

Assign them an adequate number of tasks to distract them from negative thoughts. Encourage them to contact their families via video conferencing during their breaks.

2. My helper won’t stop using her phone. What should I do?

You shouldn’t prohibit them from using their phones. Instead, explain to them that they should only use their phones during emergencies or during their breaks and rest days so they can concentrate on their work. You could also conduct regular reviews with your helper to assess her performance and outline possible areas of improvements to let them know your expectations.

3. Do I need to pay for my helper’s telephone bills and transport fares?

4. My helper joined us when we were a family of three, but now we have a newborn. Will I need to hire another helper or give my existing one a pay rise?

Discuss new work arrangements with your helper first. If she is able to care for the newborn and her usual tasks on her own, consider giving her a raise. If she is unable to tackle the additional workload, consider hiring additional helper if your situation permits. You should include all new work arrangements in revised or new employment contracts.

5. My helper took out a loan from a lender. Can I let her go without paying their dismissal wage in lieu of notice?

Letting go of helpers without paying their dismissal wages in lieu of notice can only be applicable to the following situations:

It is your helper’s personal business to take out a loan from a lender. If the lender is harassing you, this could be considered inappropriate behaviour. But if the lender is not causing any disturbances and you still choose to let your helper go, you will have to pay their dismissal wages in lieu of notice.

6. What’s the best way to pay my helper?

You should discuss the method of payment with your helper. If they ask for cash, you could use our “Salary and Holiday Receipt” template and request for your helper’s signature when you pay them their wages. Alternatively, if you are paying them by bank transfer, you should retain proof of transfer.

7. My helper was great before we renewed their contract, but that changed after we renewed it. What should I do?

8. I think my helper has been stealing from me. What should I do?

You should try to investigate this by going through surveillance camera recordings. If you find evidence of theft, file a police report and leave it to the police. Never take matters into your own hands — the authorities will help you resolve the issue in the most efficient and effective manner.

9. Can I install surveillance cameras at home to monitor my helper’s performance?

10. Can I let my helper go on unpaid leave while I’m away on holiday?

Yes, but only if your helper agrees to it.

11. My helper broke something really valuable/an electronic object. Can I make her pay for it?

According to the Employment Ordinance, you can deduct up to HK$300 from your helper’s wages for any damage to or loss of property. Monthly deductions should amount to no more than 25% of your helper’s wages. Do take note, however, if you deduct money from her salary the first time your helper breaks something, you may hurt her feelings. If this is her first time, we suggest that you let her know how devastated you feel about the broken object. Invite her to participate in the process of purchasing a replacement for the object or getting it fixed to help her empathise with your situation, show her the severity of her negligence and encourage her to be more careful. This could help prevent similar incidences in the future.

12. My helper isn’t used to local food. What should I do?

Helpers come from different countries which may differ from Hong Kong society in aspects such as cultural background, living habits, religious beliefs, dietary preferences, etc. Employers can address the adaptation problems brought by the differences in culture and living habits with an accommodating and accepting attitude, particularly at the beginning of employment during which both parties need some time to adjust and adapt to each other. For example, if your helper is used to eating a lot of rice, explain to them that the fast-paced lifestyle and varied diets of Hongkongers means they might not eat rice during every meal; or if your helper does not eat pork for religious or physical reasons, clarify whether they would be willing to prepare pork before signing them on.

13. I can’t communicate with my helper. What should I do?

Many helpers attend language courses before they come to Hong Kong. Still, English and Chinese may not be their first languages and they will still have difficulty speaking and understanding these languages. When communicating with your helper, use more body language, or enroll them in our language courses.

14. Does housework include homework help?

“Housework” is not clearly defined in the Employment Ordinance, but common interpretations of housework include doing the laundry, cooking, cleaning, childcare, gardening and caring for pets. Homework help could be considered childcare.

15. Can I ask my helper to care my child at locations outside of home, such as my own shop?

We suggest that you ask the Labour Relations Division of the Labour Department. While childcare is included in a helper’s scope of duties, if they are often required to do so in your shop, for example, this could breach their employment contract.

Helpers can refuse to perform massages, even on employers or older adults. Performing massages is not part of their scope of duties and helpers have the right to lodge a complaint at the Labour Department’s Labour Relations Devision if they are forced to perform massages, or dismissed for their refusal to do so.

17. If my former helper is unable to leave Hong Kong due to various reasons after termination or the end of their contract, am I responsible for them?

18. What could prevent my helper from leaving Hong Kong immediately after the termination or completion of their employment contract?

This could be due to:

19. Under what circumstances can the employer terminate the Employment Contract unilaterally without any notice?

Nothing concrete has been outlined, however. In any labour dispute for other reasons, the Labour Department will make final decision as per the Employment Ordinance, Common Law and past judicial precedents of the court. If the helper is repeatedly guilty of the same misconduct, the employer shall ask her to sign the letter of mistake acknowledgement or apology, which will become evidence for her dismissal. If the helper is convicted for a criminal offence (e.g. theft) or is arrested and convicted for the unlawful street trading, the employer can summarily dismiss her without any compensation (except air tickets).

20. What do I have to do to claim insurance on behalf of my helper?

If your helper encounters an accident or falls ill during work, you should on behalf of your helper do the following, which are subject to changes depending on the insurance company:

The Domestic Helper’s Comprehensive Insurance has a cooling-off period that is not subject to guarantee matters and some items. The employer should thoroughly read the terms of insurance policy to ensure their rights and benefits

21. When typhoon signal No. 8 is hoisted, can a foreign domestic helper refuse an employer’s request to work outdoors?

No. The Labour Department’s “Work Guidance During Typhoon or Rainstorm Warnings” is not legally binding. However, as the Employees’ Compensation Ordinance states, any injuries occurring 4 hours of leaving or making their way to work is considered occupational injury. Also, occupational injuries occurring as a result of natural disasters such as typhoons are not typically covered by insurance. If you require your helper to work outdoors while the Typhoon Signal No. 8 is hoisted, you will have to compensate for their injuries from your own pocket.

22. Will I need to buy travel insurance for my helper if I take them with me on a trip?

Yes, because you are responsible for requesting your helper to travel with you.

23. Will I need to pay for my helper’s plane tickets if they return to their home countries before the end of their contract?

No. After the expiry of the employment contract, the employer shall grant the helper a one-way ticket and a HK$100 travel and food allowance for the helper’s homebound travel. However, the helper may sometimes require the employer to grant in advance contractual expiry leave, free contractual-expiry air-ticket, travel allowance and food allowance. Such fees or leave do not have to be agreed upon only after the expiry of contracts. This is a matter you should discuss with your helper.
Useful Resources
A Concise Guide to the Employment Ordinance
https://www.immd.gov.hk/pdforms/ID(C)989.pdf
Download the “Practical Guide for Employment of Foreign Domestic Workers” for more information.
http://www.labour.gov.hk/tc/public/pdf/wcp/FDHguide.pdf